Where Did the Term, ‘Man’s Best Friend’ Originate?

The term “man’s best friend” goes ruff-ly as far back as they do. It is an expression that has been millions of times and reflects the unique bond between humans and canines around the world.

Are you someone who often refers to their dog as a “best friend”, “family member” or even a “fur-kid”? Dogs have the amazing capability to share and enhance our lives in ways that most other animals and pets can’t. Dogs are friendly, they love human companionship and they are very loyal. Who else waits for you by the door, smiling, beaming eyes, tail wagging, ready to shower you with kisses and make you forget about your everyday stresses.

“Man’s best friend” is the common phrase that was used to describe the human-domestic dog relationship. But how did this informal phrase arise? 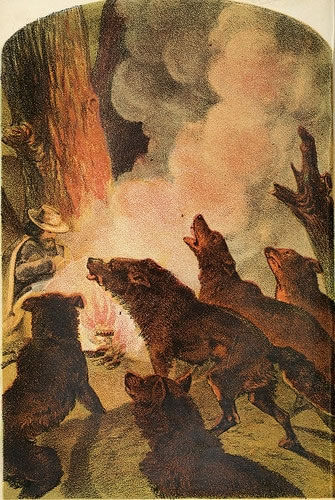 Wolves and man hunting together for mutual benefit.

Way back before the evolution of wolf into a dog, it is believed that humans and wolves mutually benefited from each others role in hunting. Wolves were the superior tracker but humans were the superior killer. Consequently, wolves would lead humans to the prey and humans would leave some of the meat to the wolves (Canis lupus) and later dogs (Canis familiaris) and humans’ symbiotic relationship.

Prior to the 19th century, large breed dogs played an important role in hunting, watching, and guarding. Their roles were for function and each dog was trained for a specific purpose (lap dogs excluded). The ‘man’s best friend’ phrase was first used by Fredric the Great (King of Russia from 1970 until 1786) as he referred to his Greyhounds as his best friends. Closer to the 19th century and more so in the 20th century, attitudes and emotional connections towards dogs began to shift and people started expressing the dynamics of their relationships with dogs.

An Introduction to Dogs

The dog is man’s best friend.
He has a tail on one end.
Up in front, he has teeth.
And four legs underneath.
Dogs like to bark.
They like it best after dark.
They not only frighten prowlers away
But also hold the sandman at bay.
A dog that is indoors
To be let out implores.
You let him out and what then?
He wants back in again.
Dogs display reluctance and wrath
If you try to give them a bath.
They bury bones in hideaways
And half the time they trot sideways.
Dogs in the country have fun.
They run and run and run.
But in the city this species
Is dragged around on leashes.
Dogs are upright as a steeple
And much more loyal than people.
Well people may be reprehensibler
But that’s probably because they are sensibler.

Since then, it has been used by a variety of people and cultures as an informal common phrase. You’ll find stories, songs, poems, and popular quotes that express pet owners love and adoration for their pets. Here the American Journalist and author of ‘Marley & Me’ a memoir about a family’s dog Marley, expresses his adoration for dogs.

They say a dog is a mans best friend... Well I can assure you that my little Nell is mine love my pup ????? pic.twitter.com/rnvq0tgk8M

Mans best friend will forever be a dog. #dogsarelove pic.twitter.com/CkXPIy1WAA

Some say that dogs are man’s best friend, Furchild says they are family!

For many dog owners in the UAE, our dogs are as much a part of daily life within our homes as is any human household member. Our dogs are always there for us, day and night, sharing in every activity from breakfast time through a cozy evening spent watching TV.

But that’s not all. Our dogs also play a big part in family life even when the family isn’t at home. They can readily go places with us in cars and encourage us to explore UAE’s outdoor environment and natural attractions in the cooler months. Some of us pet parents even take our dogs on flights to include them in family vacations, or organize their own doggie ‘stay-cation‘ at a local many pet resort and boarding facility.

Dogs give us the best of themselves: their love, loyalty, unconditional acceptance and affection, playfulness, and companionship. In return, we owe them our best and the best care that we can give them, including exercise, appropriate shelter, clean water, grooming, lots of love, and of course, a healthy, high-quality raw diet.

"Dogs are not our whole life but they make our lives whole."

Have a question or comment? We would love to hear about it.

FURCHILD is the first raw pet food company of its kind in the Middle East.

Discover the transformative power of our fresh, healthy, balanced meals, raw bones, all-natural chews, and premium handcrafted freeze-dried treats. Our Meals for Dogs and Meals for Cats are formulated by the world's leading pet food experts, approved by veterinarians, and are made of the highest quality ingredients.

8 DIY Homemade Cleaners that are Safe for Pets
Where to Adopt, Foster and Volunteer in the UAE
How to Naturally Treat Hyperkeratosis: Why do Dogs get Dry, Crusty Noses?
The Scoop on Poop – Raw vs. Kibble and Underlying Health Problems

Take advantage of our
Special Introductory Offer and get a
FREE nutritional consultation.

What will be your team name?

Once purchased we will send a confirmation email. No physical tickets are required for this event, instead you and your team members will sign-in at the door using your team name. Refund Policy: Refunds up to 3 days before event.

I, using my will refer a friend to get Furchild rewards.
Terms and Conditions